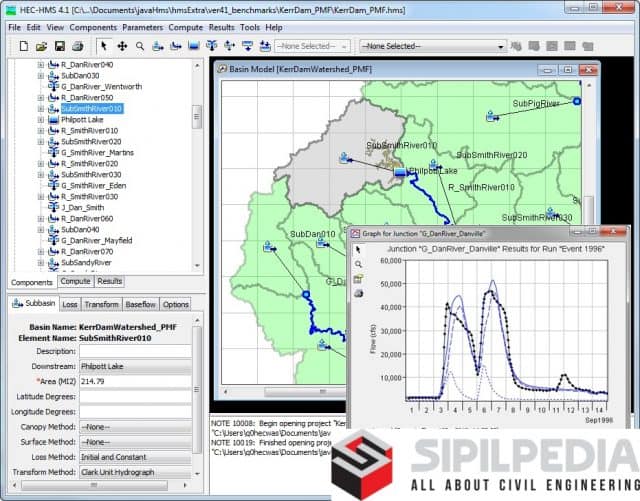 The physical representation of a watershed is accomplished with a basin model. Hydrologic elements are connected in a dendritic network to simulate runoff processes. Available elements are: subbasin, reach, junction, reservoir, diversion, source, and sink. Computation proceeds from upstream elements in a downstream direction.

An assortment of different methods are available to simulate infiltration losses. Options for event modeling include initial constant, SCS curve number, exponential, Green Ampt, and Smith Parlange. The one-layer deficit constant method can be used for simple continuous modeling. The three-layer soil moisture accounting method can be
used for continuous modeling of complex infiltration and evapo-transpiration environments. Gridded methods are available for the deficit constant, Green Ampt, SCS curve number, and soil moisture accounting methods. A canopy component can be added to represent interception and transpiration. A surface component can be added to represent depression storage.

Seven methods are included for transforming excess precipitation into surface runoff. Unit hydrograph methods include the Clark, Snyder, and SCS techniques. User-specified unit hydrograph or s-graph ordinates can also be used. The modified Clark method (ModClark), is a linear quasi-distributed unit hydrograph method that can be
used with gridded meteorologic data. An implementation of the kinematic wave method with multiple planes and channels is also included.

Five methods are included for representing baseflow contributions to subbasin outflow. The recession method gives an exponentially decreasing baseflow from a single event or multiple sequential events. The constant monthly method can work well for continuous simulation. The linear reservoir method conserves mass by routing infiltrated precipitation to the channel. The nonlinear Boussinesq method provides a response similar to the recession method but the parameters can be estimated from measurable qualities of the watershed.

A total of six hydrologic routing methods are included for simulating flow in open channels. Routing with no attenuation can be modeled with the lag method. The traditional Muskingum method is included along with the straddle stagger method for simple approximations of attenuation. The modified Puls method can be used to
model a reach as a series of cascading, level pools with a user-specified storage-discharge relationship.
Channels with trapezoidal, rectangular, triangular, or circular cross sections can be modeled with the kinematic wave or Muskingum-Cunge methods. Channels with overbank areas can be modeled with the Muskingum-Cunge method and an 8-point cross section. Additionally, channel losses can also be included in the routing. The constant loss method can be added to any routing method while the percolation method can be used only with
the modified Puls or Muskingum-Cunge methods.

Water impoundments can also be represented. Lakes are usually described by a user-entered storage-discharge relationship. Reservoirs can be simulated by describing the physical spillway and outlet structures. Pumps can
also be included as necessary to simulate interior flood area. Control of the pumps can be linked to water depth
in the collection pond and, optionally, the stage in the main channel.

Potential evapo-transpiration can be computed using monthly average values. There is also an implementation of the Priestley Taylor method. A gridded version of the Priestley Taylor method is also available where the required parameters of temperature and solar radiation are specified on a gridded basis. The Penman-Monteith method uses an energy balance at the land surface. A user-specified method can be used with data developed from analysis outside the program.

Snowmelt can be included for tracking the accumulation and melt of a snowpack. A temperature index method is available that dynamically computes the melt rate based on current atmospheric conditions and past conditions in the snowpack; this improves the representation of the “ripening” process. The concept of cold content is incorporated to account for the ability of a cold snowpack to freeze liquid water entering the pack from rainfall.
A subbasin can be represented with elevation bands or grid cells.

Simulation results can be viewed from the basin map. Global and element summary tables include information on peak flow, total volume, and other variables. A time-series table and graph are available for elements. Results
from multiple elements and multiple simulation runs can also be viewed. All graphs and tables can be printed.

Most parameters for methods included in subbasin and reach elements can be estimated automatically using optimization trials. Observed discharge must be available for at least one element before optimization can begin. Parameters at any element upstream of the observed flow location can be estimated. Seven different objective functions are available to estimate the goodness-of-fit between the computed results and observed discharge.
Two different search methods can be used to minimize the objective function. Constraints can be imposed to restrict the parameter space of the search method.

The basin model includes features designed to increase the efficiency of producing forecasts of future flows in a real-time operation mode. Zones can be created that group subbasins together on the basis of similar hydrologic conditions or regional characteristics. Zones can be assigned separately for loss rate, transform, baseflow, and channel routing. The forecast alternative is a type of simulation that uses a basin model and meteorologic model
in combination with control parameters to forecast future flows. Parameter values can be adjusted by zone and blending can be applied at elements with observed flow.

Frequency storms are commonly used to compute the flow resulting from a precipitation event with a known exceedance probability. For example, a common regulatory requirement is to compute the flow that results from a 1% storm. The storm area is a key parameter because the average intensity of a storm decreases significantly as the area increases. The depth-area analysis is available to facilitate the computation of the flow throughout a large watershed. Points are selected where flow estimates are required, and the storm area is automatically adjusted to compute the correct storm area for each selected point.

Watersheds exhibit a great deal of variability. The land surface elevation can vary dramatically from headwaters to outlet. Soil properties change from one place to another place. Land use also changes with location but also changes over time. Each of the hydrologic processes can be modeled at varying levels of detail. There is a lack of perfect knowledge of the atmospheric conditions over the watershed. All of these issues jointly produce uncertainty in the simulated watershed response. The uncertainty analysis allows parameters to be represented with a probability distribution function (PDF) and then performs a Monte Carlo simulation to describe the uncertainty in output variables such as peak flow, volume, and reservoir pool elevation.

Optional components in the basin model can be used to include sediment and water quality in an analysis.
Surface erosion can be computed at subbasin elements using the MUSLE approach for rural areas or the build- up/wash-off approach for urban settings. Channel erosion, deposition, and sediment transport can be added to reach elements while sediment settling can be included in reservoir elements. Nutrient boundary conditions (nitrogen and phosphorus) can be added to source and subbasin elements. Nutrient transformations and
transport will be computed in reach and reservoir elements.

The power and speed of the program make it possible to represent watersheds with hundreds of hydrologic elements. Traditionally, these elements would be identified by inspecting a topographic map and manually identifying drainage boundaries. While this method is effective, it is prohibitively time consuming when the watershed will be represented with many elements. A geographic information system (GIS) can use elevation
data and geometric algorithms to perform the same task much more quickly. A GIS companion product has been developed to aid in the creation of basin models for such projects. That companion product is Geospatial Hydrologic Modeling Extension (HEC-GeoHMS), and can be used to create basin and meteorologic models for use with the program. 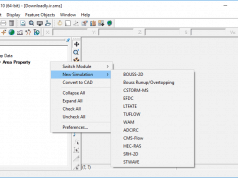 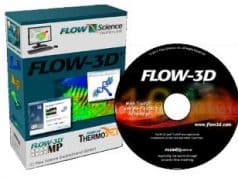