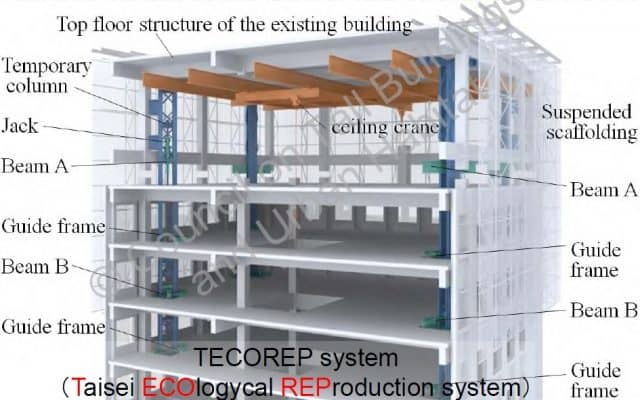 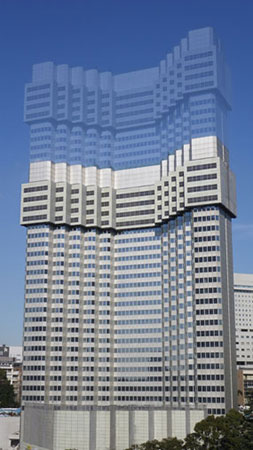 One of the new demolition methods was used to break down a 40-story building located near Akasaka, a Tokyo entertainment district. The building, a 140-meter steel-reinforced concrete structure, was used as a hotel that opened in 1983 and closed in March 2011 as its facilities became obsolete. Demolition is in full swing.

The newly introduced demolition system, called the “Taisei Ecological Reproduction System” (Tecorep System), has been developed by a major Japanese general contractor. Under the conventional system, a building is destroyed from top down with the roofless top left open. The Tecorep System, however, keeps the building as an enclosed space, retaining the roof of the top floor for cover. The outer circumference of the top floor is covered with soundproof panels so that noise and flying dust can be minimized.

The roof of the top floor is supported by 15 temporary columns, each 20 meters high, which are placed on giant beams two floors below. In the closed space, building components such as steel columns, beams and flooring are disassembled. Every time the two highest floors are dismantled, jacks incorporated into the columns are lowered, and the building becomes two floors lower as a whole. Seen from the outside, there is no way to know the building is being torn down and the building looks to be gradually shrinking, making it a mysterious demolition system.

The Tecorep System takes account of energy conservation as well as environmental protection, generating power during demolition work for use on the site, the first such method developed in the world.

Power is generated by a motor that runs on energy created when disassembled building components are lowered by crane through a hole punched in every floor. The electricity produced is stored in a battery. When a batch of components weighing five tons is lowered from the height of 100 meters, it generates about 100 kilowatts of electricity per hour. It is similar in principle to electric conversion of energy generated by applying the brakes on a train or a car or lowering a container load of goods at a port. The electricity generated is used for lighting on the site and other purposes.

The top floors of Akasaka Prince Hotel covered with scaffolding and soundproof panels as seen from the outside (left) and inside (right).

Moreover, under the new method, temporary work to shield a building can be minimized, with the shielding materials needed reduced by more than 50%. The dismantling work in the closed environment can also decrease noise by 17-23 dB or more as compared with conventional methods.

Dust from conventional demolition work used to reach a radius of 200-300 meters, but the new dismantling method can reduce dust by as much as 90%. When dismantled with the use of cutters and other equipment making less noise than heavy machines, dust and noise can be reduced further. 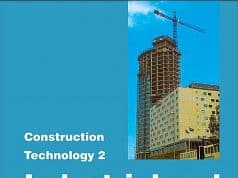 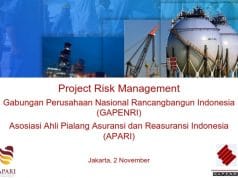 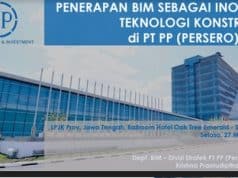